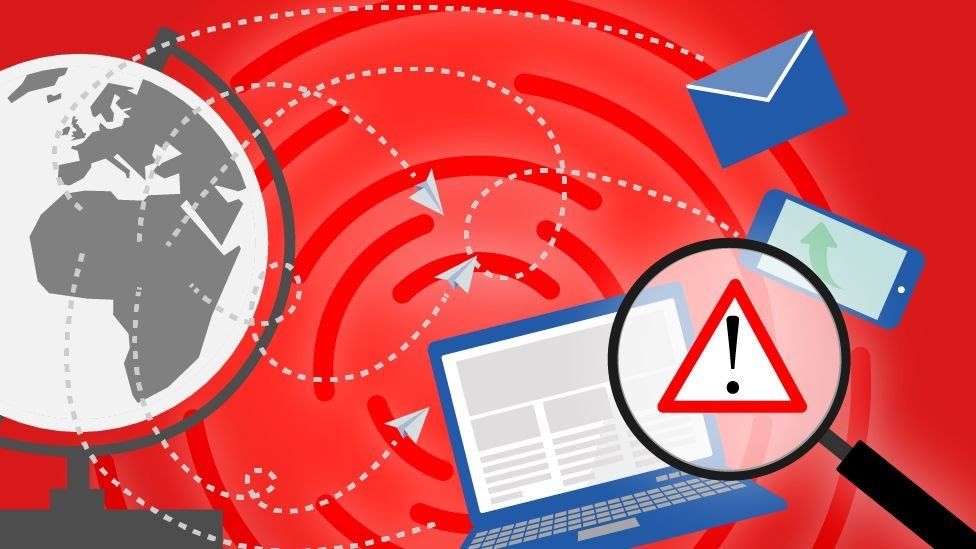 Disinformation: a threat to women and democracy

Social media has become the main platform by which people are informed. With the technological advances and the pandemic, a large part of the electoral campaigns have taken place on these platforms. In the middle of the presidential campaign in the country, this situation is positioned as one of the main topics on social media, which has also brought with it the proliferation of disinformation and fake news. When this disinformation and fake news target women, they seek to delegitimize them in order to hinder their participation in electoral processes. This disinformation is generally based on sexist beliefs that reinforce pre-existing ideas about the role of women in political activity, especially in societies that are not used to women being in power.

Disinformation promotes suspicion and mistrust of women who counter the norms publicly. The intention of disinformation as a form of gender and digital violence is to make us question whether women belong or are capable of making decisions, becoming a more discreet and pernicious way of undermining their participation and dissuading them from participating in electoral processes. This threat has devastating effects not only for women in public life, but also for democracies everywhere.

Disinformation represents a considerable barrier, especially in an age where studies show that social media users are more likely to believe disinformation. Unfortunately, the little data that exists in relation to gender and digital violence indicates that it is women who are often the targets of attacks and disinformation on these platforms. In order to combat disinformation and fake news, it must be recognised as a negative factor on the participation of women in electoral processes and in politics. The best way to do this is to start with research. We need to document and analyze disinformation against women in order to respond more effectively.

As a result of this issue, Fundación Multitudes decided to carry out a study in order to investigate, document and analyse disinformation against women parliamentarians in Chile. According to the information collected in the study:

96,8% of the women parliamentarians surveyed have been victims of disinformation as a form of digital and gender-based violence in their years of public service or during their campaign work.

This study, born from the Women Project, which seeks to reduce the gap between political participation and women, was carried out with Chilean parliamentarians in order to learn more about their experiences and stories in relation to political exercise and the delegitimization suffered due to campaigns of disinformation and data breach. To this end, an anonymous survey was conducted consisting  of questions to characterize the sample (position, age, belonging to the LGBT+ community, years of service and belonging to an indigenous people), four quantitative  questions on the experience on disinformation and, a section where the parliamentarians are invited to describe a personal experience regarding this issue. This survey began to be applied in January 2021 until September of the same year.  64,5% of the parliamentarians answered the survey, of which 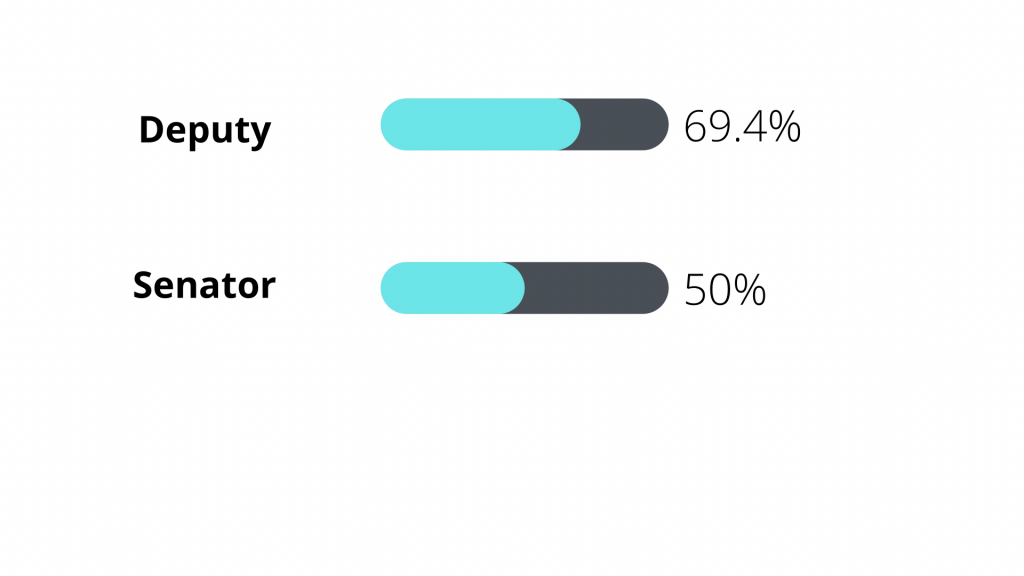 When asked about their experience with disinformation in political practice, a vast majority of over 90% answered affirmatively. Evidently, this  is a deep-rooted, widespread and generalized phenomenon in the lives of women parliamentarians, their careers, and their political work, and it may be argued that this phenomenon may also be extended to other women candidates and/or participants in public political life as activists and leaders. 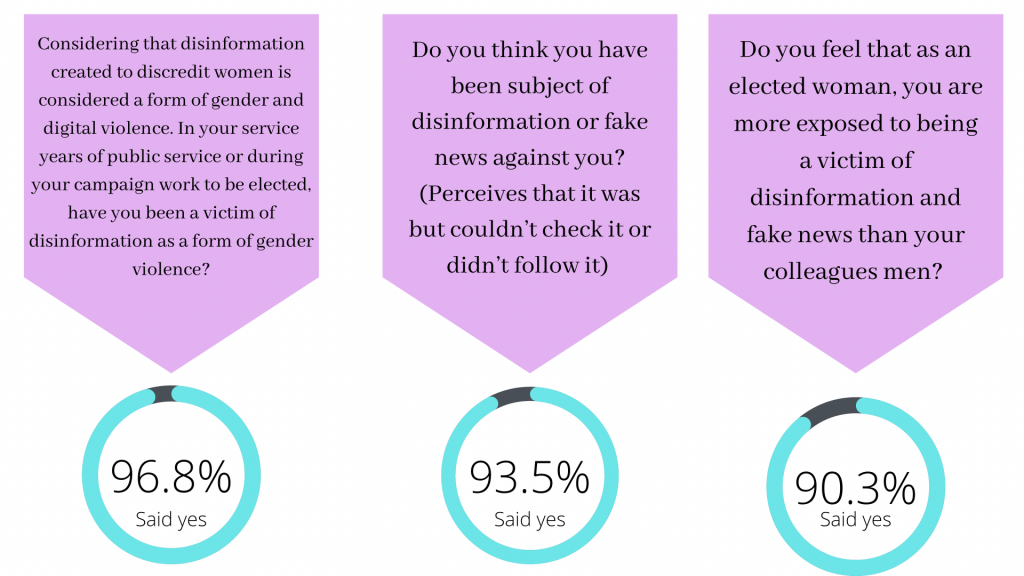 It was also discovered as a result of the survey and the conversation held with the respondents that although women parliamentarians do not consider disinformation to be something that exclusively happens to women, they do consider that the discussion around women in public office includes superficial issues such as appearance, sexual life, family, or the role they play within their private life. Therefore, we can consider disinformation towards women as a type of gender violence to discredit access and decision-making.

This double accountability of their private and public life, considering disinformation as disarmament, invalidation and delegitimization of their person,  can create a significant barrier for the participation of women in politics and the possibility of seeing a professional career there, either because they do not want to be exposed to this double review or because they do not want to expose themselves to the consequences that disinformation campaigns  leave behind, especially if these are linked to their quality as person or women within the society in which they find themselves. At the national level, only 23% of the seats in Congress are held by women, and at the local level – mayors – only 10% are women.

The Executive Director of Fundación Multitudes, Paulina Ibarra, declared at the time of being interviewed by the newspaper El Mercurio regarding the aforementioned survey that, “the results of the study, although not surprising, were shocking, because disinformation is a form of gender and digital violence, and the serious problem is that people do not know how to recognize disinformation, they do not have the knowledge to recognize these campaigns”. She also highlighted a new edge that is deduced from the last question of the survey, since 93,5% of the respondents answered affirmatively to the question: “If you had the knowledge that you could become a victim of disinformation, fake news or gender and digital violence, would you have run for public office?” Given this, the Executive Director of the Foundation stated that “this corresponds to a normalization process” of the same phenomenon.

Finally, the report concludes that while disinformation campaigns are related to national politics, the people who spread it often use narratives targeting the gender and sexuality of women in order to disrupt democratic processes.  Frequently, this is then  amplified by the media and the general population, who, although not having the intention, do not recognize the disinformation or don’t do the due diligence process to avoid the dissemination of disinformation campaigns.

It is up to civil society, government, and the private sector to decide what we are willing to tolerate. It is essential that disinformation be recognized as a collective problem in order to place this issue on the public agenda, which will facilitate the formulation of policies and thus promote a change that allows women to participate actively in decision-making processes and the design and implementation of public policies, which is key to building a more stable and equitable democracy. We must choose to do better for women, democracy, and our shared future.